How to Effectively Get a Raccoon out of your Attic How to Effectively Get a Raccoon out of your Attic

How we do raccoon removal from attics in Houston, Dallas and Denver

Each night when I pull up to my house, I take a look around the front and look for anything out of place in my garden, on the roof and so on. This is built in for me, maybe because of all of the clients that we have helped with animal removal from their homes, maybe because I live next to greenbelt, maybe it is because I have seen tons of different animals roaming in the street at dusk and dawn looking for snacks, I happen to think it is all of the above. Considering our home’s building completion was less than two years ago I hope to keep this home completely free of any unwanted animals. Even though my family laughs at me for pointing things out, this habit has kept us animal free where there are others on our street who have not been so lucky. 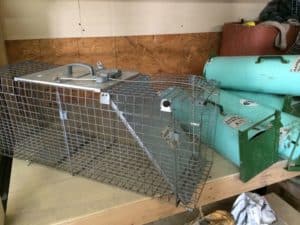 The not so lucky ones I am referring to are my neighbors at the top of the street. Last spring they had a trap in their front yard, chained to their slim tree, no bait and it sat there empty for a week before I offered to give some help. When I asked what was going on it ended up that they had a raccoon that had gotten into their attic while they were making some modifications to the house. They had been told by another company that they should place the trap in the yard to catch the raccoon when it left the house for food. A week later the raccoon in their attic was still coming and going freely as well as starting to create a stink from the feces and urine in the ceiling.

The mother raccoon that had been visiting them was free to come and go as she pleased and her babies were quite safe where she left them during the day, in the attic, so there was no reason that she would enter a trap besides the obvious that the trap was in the front yard with no bait do there was no interest in the trap, if she had even seen it supposing that all raccoons know that the polite way to enter and exit a home that you are visiting is through the front walkway.

Does it really hurt to let them just leave on their own? This momma was well off in the attic, here she had a temperature regulated space where she could leave her pups where no other animals or humans could disturb them, the only thing she needed to focus on was finding food and letting her babies grow. While these may seem like things that you wouldn’t mind playing host to there are a number of reasons that it is a bad idea to let them stay in your home, first and foremost, the amount of damage that can be done. A single raccoon living in your attic can be the cause of needing all of your insulation replaced, ripped wires, broken pipes and the list goes on. They are strong and wont hesitate when there is an adjustment that is needed to make themselves more comfortable.

One of the other major reasons that I personally suggest getting them out of your home as soon as possible is because of the amount of ick that they can carry around. A raccoon can be a carrier of rabies as well as their feces being toxic. NOTE: DO NOT EVER HANDLE RACCOON FECES OR WASTE WITHOUT THE PROPER PERSONAL PROTECTION. Raccoon carry histoplasmosis as well as distemper, without the proper protection you can be in danger of becoming ill yourself. The key thing with my neighbors house was getting the area that the raccoon was using to get in and out sealed up and then moving the trap to the attic area and getting some bait in the trap. Once I went over this with them and they did all of the repairs and got the trap placed it was a matter of about two days until the raccoons had all been trapped and relocated. Getting them out was the easy part, it was the keeping them out that needed work in the raccoon removal success.

Believe it or not the same technician may vary their trapping methods depending on what the situation is in your home. Especially coming into spring, you might find that they suggest the use of eviction fluid before trying any trapping. Eviction fluid is a mix of male raccoon pheromones and predator urine, these signal to the mother that her babies may be in danger and to get them moved out of the area. As communities expand and take over more and more wildlife areas the accounts of animals getting into homes and places that they should not be. You see this quite a bit in Houston, Dallas and Denver. The animals are still there despite the lack of wooded spaces for them, they end up adapting and making use of our homes, gardens and trash. Most animals that you deal with, raccoons in your attic for example, are convenience eaters, meaning that they will eat anything that they can find to eat, including but not limited to dog food, trash, carcasses of other animals and generally anything that can become food for them. Meaning, we actually make it very inviting for animals to enter our homes!

Save yourself the headache and call for professional help!


Chimney, Fireplace, & Masonry
We Keep it Possible to Burn Fire in Your Home.