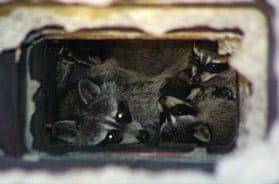 Stories from raccoon removal Houston can be quite interesting!

Working as a customer service rep here at Masters Services, I get to answer the phone all day. Some of these calls are very interesting. Now that spring is here, we’ve gotten A LOT of raccoon calls recently!! It is probably our second most common call, first being rats in the attic. Whether you have a raccoon stuck in your chimney, a mom and her babies nesting in your attic, or a suspicious looking raccoon outside of your home, there is no doubt we’ve been getting a lot of calls.

One of the most common calls I get is when someone rings in and says that they hear a scratching or scraping noise coming from inside their walls. They often think it’s a squirrel or something smaller than a raccoon. Sometimes people call and say they smell a terrible dead animal smell coming from their attic – nine times out of ten, that terrible smell will be a dead raccoon.
Raccoons love to make your attic their home. They like the easy shelter and quiet place to have their babies. And unfortunately, Spring is the season for raccoons to start having babies!!

Raccoons love to make your attic their home!

Often, technicians will seal up all the holes except for one, and set up a one way door. Just today, I talked to one of our technicians and he said he used our special raccoon eviction fluid to get the raccoons to vacate the premises. This eviction fluid is NOT poisonous to the raccoons, you or your family. It’s a safe alternative. The fluid mimics pheromones of a male raccoon, which makes the female raccoon want to vacate the area with her babies. During the first few weeks of babys birth, the raccoon mamma does NOT want to have anything to do with male raccoons. So the eviction fluid just makes her want to take her babies to somewhere different where she won’t be bothered. After the raccoon have left the area through the nifty one way door, the pesky raccoons will be out of your hair and your attic!!

Our technicians will also provide sanitizing and deodorizing services, once the raccoons have left your attic. He will also fill up that last hole and you can go on enjoying your spring!

Recently we had a customer who had a family of raccoons who had taken up home in their chimney. They called us for help with raccoon removal Hosuton. When we went to help the homeowners with the relocation of the new family and found that the mother had already left for the day to scavenge for food, this made it easy for us to reach above the damper of the fireplace and get the babies out, we then explained to the homeowner that without their mother there was a very small chance of the kits surviving. The homeowner agreed that the babies would be left in a insulated box near the chimney and the homeowner would keep an eye out for mom. If the babies were not collected by morning then we were on the hunt for a rescue that had the space and caregivers for these little ones. Sure enough, right as the sun was setting the homeowner watched from her window as the mother came back and one by one collected and relocated her kits on her own. A mother will still come back for her babies even if they have been touched by human hands.

There are a few rumors going around the internet and wildlife rescue areas, this is that if the babies of an animal come in contact with a human the mother will reject the babies and they will be left to die. This is simply not true. We come in contact with thousands of animals and babies each year, we have never found a situation where an animal was left behind after coming in contact with one of our technicians, the only time we have seen them left is when something has happened to the mother and she is not capable of getting the babies.

This being said, it is not a good idea to handle any animals of any age without professional help, this is due to the risk of disease and injury that can occur when dealing with wild animals.

We can help you with anything you need when it comes to raccoon removal Houston.

Masters Services (713) 723-4854 has been in the wildlife and raccoon removal Houston business for over 17 years now, we have trained and experienced technicians that can help you with raccoon removal as well as proofing of your home to ensure that the animals are not able to get in again.