Masonry Experts in Dallas, TX are Leaders in the “Masonry Near Me” Search

Have you ever heard the news about a house fire in your neighborhood? You wonder how it happened. You assume it was an electrical fire. Think again. It was a fire inside the chimney that quickly spread to other parts of the house. How does that happen? There could be multiple causes but typically it’s the result of a buildup of creosote.

What is Creosote and Could My Chimney Be Filled With it Right Now?

Yes, if you light the fireplace regularly and have never had a professional cleaning, creosote could have built up. Creosote is the substance that forms in a chimney as a result of burning fires. It’s not the same as soot that simply makes a chimney dirty. Creosote is dangerous because it’s extremely flammable. Should a fireplace not be cleaned professionally, the creosote accumulates and those deposits thicken throughout the years, increasing the potential risk of fire. A spark from a lit fireplace that comes in contact with a large amount of creosote is not good. Even if a fire is avoided, be advised that exposure to creosote poses health risks.

What Can I Do To Avoid Creosote Buildup?

To avoid fire and reduce the potential of health risks, it is recommended that a homeowner schedules a chimney cleaning annually. Having the chimney inspected and cleaned by a professional masonry company is called a chimney sweep.

How is a Chimney Sweep Performed?

A certified masonry professional will inspect every chimney and firebox before performing a chimney sweep. This important and thorough camera inspection will ensure there are no hazards hiding inside your chimney prior to the sweep. The chimney sweep is professionally performed using high-tech clean-up equipment, specialized brushes, sophisticated tools, and a powerful vacuum. The team will work diligently with hand tools to scrub and remove the dangerous and potentially flammable creosote from the chamber, smoke shelf, damper, and firebox. Masters Services recommends an annual chimney sweep be performed in all homes using fireplaces in Dallas, TX.

A Chimney Camera Inspection is Imperative

A chimney camera inspection is exactly how it sounds and is much more than just an inspection using a flashlight. A specialized camera is sent up the chimney to investigate and see areas not visible by the eye. Each chimney camera inspection is performed to identify any moisture, fire or animal damage that has occurred over time to the chimney parts. A professional masonry company will inspect every chimney and firebox before performing a chimney sweep. This includes reporting any code violations or necessary repairs. Masters Services performs a chimney sweep only after the team has professionally inspected the chimney.

Chimney Repairs Should be Performed As Soon As Possible

Masters Services: Trusted and Highly Recommended Local Masonry Near Me Company For Over Two Decades 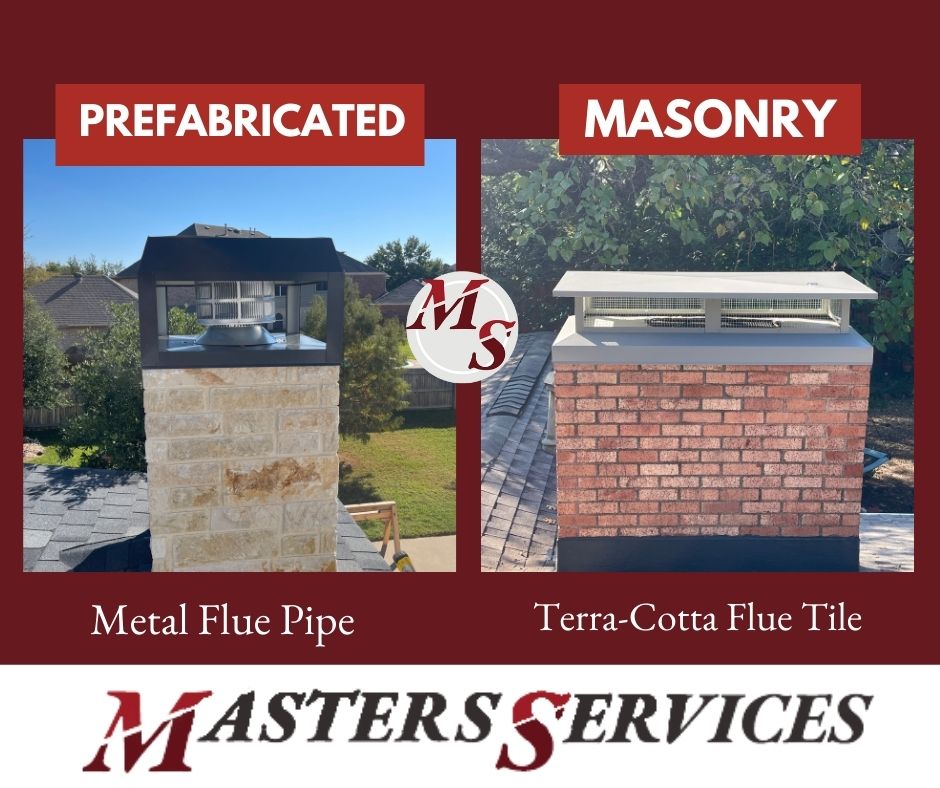 In addition to chimney and fireplace masonry near me in Dallas, TX, Masters Servicesmanufactures and sells custom-made premium chimney caps and glass fireplace doors. The fireplace glass doors are made from steel and tempered glass and can be crafted to fit almost any fireplace opening. Masters Services also performs air duct, vent cleaning, and wildlife removal in Dallas County.

Attached to your heating and cooling system are air ducts that transfer the air from these systems throughout your home. These same air ducts accumulate dust, mold, grime, debris, viruses, pet dander, and allergens throughout the year. A professional air duct cleaning by Masters Services can help to improve the air quality in your Dallas County home for a cleaner, healthier breathing.

Dryer Vent Cleaning Can Help To Reduce Risk of Fire

Lint buildup in the dryer vent exhaust duct can block airflow and potentially cause a dryer vent fire. In addition, when a dryer cannot exhaust air properly, a homeowner needs to run the dryer longer to get the clothes dry. That results in costing you more in your energy bill to run the dryer because it takes longer to finish drying the laundry. A professional dryer vent cleaning by the Masters Services experts can help keep a dryer running at maximum efficiency.

Hearing strange noises or scratching in your ceiling or walls indicates that there may be trapped wildlife. This can happen if a chimney cap is not present or perhaps the cap was inadvertently removed. The expert Masters Services wildlife removal team has been in business for over 16 years and can help to remove wildlife from hard-to-reach locations. These removal efforts include humane tactics to remove the unwanted inhabitant and safely relocate it. This could include squirrels, raccoons, rats, bats, skunks, and more. Upon safe removal of the critters, a homeowner is advised to install or replace the chimney cap.

Masters Services performs chimney inspections, cleaning, repairs, custom fabrications, installations, and another masonry. These professionals strongly suggest that homeowners schedule regular chimney service for the safety and welfare of the home’s occupants. From soot to creosote buildup, a dirty chimney can cause fires, which may lead to devastating damage.

If you are experiencing issues with your chimney and require a chimney sweep, repair, or annual maintenance, Masters Services is the recommended service provider of masonry near me in Dallas County.

The compassionate Masters Services team is prepared to help you with all of your masonry needs. If you have any questions or you are ready to schedule an appointment, call 972-877-4650 or visit https://mastersservices.com/ today.