Masters Services > Blog > Chimney Caps > Eyes in the chimney, the need for a chimney cap 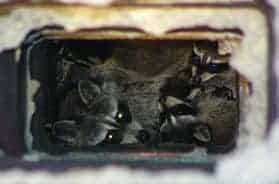 The holidays are approaching and will be here before we know it. During all the hustle and bustle that goes along with the holiday season, my first thought is always, my cozy grandma’s house, by the fireplace with family. I think one of the most memorable winter seasons at grandma’s house for the holidays was when we discovered the eyes in the chimney! I grew up always as grandma’s little helper. Every year was the same normal routine, in late October we would begin to transform, and prepare the house for the holidays. This particular year was by far very different.

Grandma was dusting along the fireplace mantle when she described hearing a fluttering type movement coming from the chimney. Naturally, to the rescue I come. I throw open the fireplace doors, looking past the leftover heaping pile of ash from last year, and stick my head into the fireplace attempting to look up the chimney. Of course all I could see was blackness with faint sunlight coming through the top. Right as I was about to attribute this “fluttering” to grandmas old age, I heard it! The flapping of wings and something flying into the walls of the chimney. I quickly ran to get a flashlight. I once again stuck my head in the fireplace, using the flashlight to look for the culprit of the noises. I saw black blobs with glowing eyes looking down at me. Startled, I screamed and jumped back out of the fireplace, bringing half the soot and ashes back out with me.

The eyes were staring back at us!

Once again I wanted to be grandma’s hero, so I decided I was going to help her get a chimney cap, to protect her and her home from these flying rodents. I hired a chimney cap specialist, which to my surprise turned out to be a very worthwhile and great gift idea. The process was quite simple as well, it took about an hour for the chimney man to measure for the cap, and within a week he was back to install. The chimney cap not only helps keep the “eyes” out of the chimney, but also keeps cold drafts from entering the house through the chimney. After the chimney cap was installed I was grandmas hero, by not only preventing critters from getting in the chimney but also helping grandma save money by not having those drafts whirl through her home. So as the winter weather and holiday season approaches, watch for those “eyes” in the chimney and make sure you keep that chimney cap on.

Call Masters Services for a custom chimney cap for your chimney and home.