What is best chimney cap to install?

Let’s breakdown the best chimney cap to install types, styles, materials, and installation.
There are many types of chimney caps. You must first determine what type of fireplace your chimney is venting.

Here is a list of types of chimney caps:

Chimney caps are made of steel, stainless steel, copper, prep ready to be painted steel, colored steel, and galvanized steel.

The benefits to have a chimney cap are:

As a Master Certified Chimney Technician, I sworn an oath to install only the best products on the market for chimneys. Flue chimney caps do not cover the entire chimney top therefor leaving it exposed to future deterioration. If a full coverage chimney cap like our No 1 chimney cap or No 2 chimney cap is capable of being fabricated then that is what should be installed.

In an upcoming podcast I will be discussing why I only sell full coverage chimney caps. Chimney Cap No 1 for Rain

Dallas, Texas was the origin of the first custom chimney design like the No 1 chimney cap. 40 years ago or more a local sheet metal shop was fabricating the Chimney Cap No 1 for local Dallas chimney sweep. Masters Services dropped selling flue caps that only cover the flue opening in 2000. Master Services only sells the best chimney cap to install for their clients.

The chimney cap No 1 parts  include a base, legs, spark arrestor guard, and a lid.

The chimney cap No 1 has a base designed to shed off water coming from the lid. The base also comes inward at the top of the skirt 6 inches to catch blowing rain from entering the chimney flue. The base is the bottom of the chimney cap that secures to the chimney by wires and anchors. The legs are attached to the corners and possibly the middle for support. The legs hold up the lid and anchor the spark arrestor screening. The spark arrestor screening is half inch hardware cloth. It is made to NFPA 211 standards and also acts as an animal or bird guard. The chimney cap No 1 is the best animal and bird protection product on the market. Larger animals like raccoon cannot penetrate these chimney caps. A raccoon will sit on a chimney with a flue caps on it and work to get the chimney cap off or damage it to get through it. This is the second reason why Masters Services stopped installing flue caps. First is moisture protection. 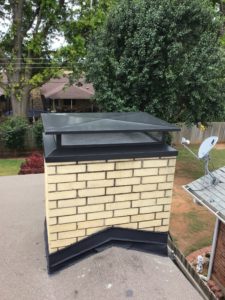 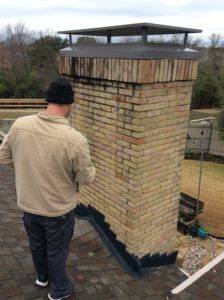 The lid for a chimney cap no 1 appears to be flat. It is not. The lid has a cross break in it to shed water off the sides. A cross break is where you bend an “X” in the lid from one corner to the opposite corner. The lid has a one or more inch skirt around the entire outer edge to prevent rain from going inward to enter the flue.
Custom chimney cap no 1 average cost is $450 to $650. It can cost more depending on the size and/or difficulty of installation. Multiple the steel cost by two and that is your average copper price installed.

The chimney cap no 2 is the best upgrade to the No 1 in Dallas and Houston. The base, legs, and spark arrestor is the same as the chimney cap no 1. The lid is the big difference. It is a raised lid to look like a roof peak. It has an option of being different heights and to add standing seams. 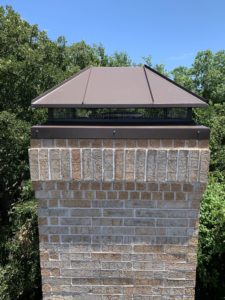 The chimney cap no 2 is upgraded often to copper. Copper chimney caps patina nicely like the Statue Of Liberty over time. Copper does not rust or degrade like steel can if not properly sealed. If your house has copper gutters or copper gas lights then the custom cap no 2 is the chimney cap for your house.

You can upgrade the pitch too much higher and add arched windows to the no 2 chimney cap for a minimal fee.
Custom chimney cap no 2 average cost is $650 to $1000. It can cost more depending on the size and/or difficulty of installation. Multiple the steel cost by two and that is your average copper price installed.

Masters Services crown jewel of chimney caps. Offered in a lid that is the same size of the chimney OR offered with a lid expanding out over the chimney up to 6 inches. Options include standing seams, arched windows, shorter or taller lid, and can be left open at the top for factory built systems to act as a shroud. 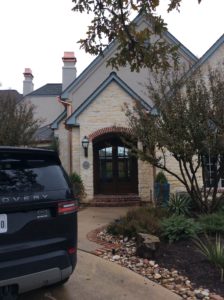 Chimney caps are an essential part of completing your chimney flue. Here are some facts about chimney caps…