Tuckpointing: What Is It and Do You Need It for Your South Houston, TX Brick Chimney?

When the residents of Harris County are in need of tuckpointing services, Masters Services is the first company they call. We’re a full-service, locally owned and operated South Houston, TX brick repair company, and our team of professionally trained, fully licensed and insured technicians have more than 18 years of experience repairing and restoring brick chimneys throughout Texas. Our entire team is committed to meeting the needs and exceeding the expectations of the clients we work with. Whether your brick chimney is just starting to look worse for the wear or it’s severely damaged, with tuckpointing services from Masters Services, you can rest assured that you’ll receive outstanding results.

What is tuckpointing? What are the benefits of tuckpointing? How do you know when you should contact a South Houston, TX brick repair company to schedule this important service? To learn the answers to these questions, keep on reading. 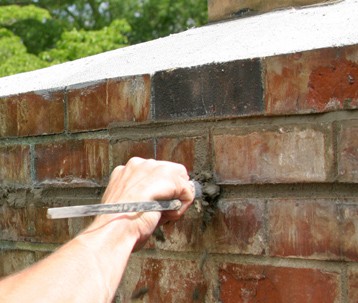 Tuckpointing (also known as repointing) is a form of masonry repair. It involves removing damaged mortar, cleaning out the joints, and replacing it with fresh mortar. During the process, a South Houston, TX brick repair professional will also repair any loose or damaged bricks in your fireplace, and revitalize the color of the brick and mortar.

While the length of time mortar retains its durability varies and depends on several factors (the climate, how frequently you use your fireplace, and how well the mortar was initially installed, for example), on average, tuckpointing should be done every 20 to 30 years. If you’ve just moved into your Harris County house or you’ve lived in it for years and you’ve never had the service done before, you should consider having your chimney inspected by a South Houston, TX brick repair specialist to determine if it needs to be tuck pointed, or to find out when you may need to have the service performed in the future.

It’s easy to see why tuckpointing is such an important part of routine brick fireplace maintenance. Whether you’re sure that your chimney needs to be repointed or you want to schedule an appointment for a complimentary consultation, contact the most trusted South Houston, TX brick repair contractor: Masters Services. Our team of fully licensed and insured technicians are experts in tuckpointing and with more than 18 years of experience and a proven track record of success, when we’re on the job, you can have confidence knowing that you’ll receive exceptional results. To learn more about our services, submit a contact form right through our website, or dial 972-877-4650. However you get in touch with us, one of our friendly professionals will be more than happy to assist you with all of your needs.

Some information about South Houston, TX

South Houston is a city in the U.S. state of Texas, within Houston–The Woodlands–Sugar Land metropolitan area and Harris County. The population was 16,983 at the 2010 census. It is bordered by the cities of Houston and Pasadena, and geographically located southeast of Houston.

C.S. Woods of the Western Land Company founded the settlement of Dumont in 1907. A post office appeared in 1910. In 1913 Dumont was incorporated as the city of South Houston. Because of the 1913 incorporation, Houston did not incorporate South Houston’s territory into its city limits, while Houston annexed surrounding areas that were unincorporated. South Houston’s initial industrial activity consisted of shipping produce along the Galveston, Houston and Henderson Railroad. The hurricane of 1915 destroyed many of the local industries. The establishment of the Houston Ship Channel resulted in the establishment of manufacturing industries inland, including in South Houston. Between the 1940s and the early 1960s South Houston found rapid population growth. The city had 7,523 inhabitants in 1960. In 1980 South Houston had 11,782 inhabitants and 303 businesses. In 1990 14,207 inhabitants lived in South Houston.

From the 1980 census to the 1990 census, Hispanics began to move into South Houston by an amount between 1,000 and 3,500 per square mile. Most Hispanics in South Houston were of Mexican descent.