An Overview of Chimney Brick Mortar Repair in Richardson, TX

When Dallas County homeowners are in need of reliable, efficient, and affordable brick mortar repair services for their chimneys, Masters Services is the first company they call. With more than 18 years of experience and a proven track record of success, our fully licensed and insured, locally owned and operated Richardson, TX brick repair company specializes in all aspects of masonry repair. Whether the mortar joints in your chimney have just started cracking or they’re crumbling and falling out, if you’re looking for chimney brick mortar repair services, for the best results possible, contact Masters Services.

What You Need to Know About Chimney Brick Mortar Repair in Richardson, TX

When the weather outside is frightful, gathering around the fireplace is so delightful. A fireplace is a source of reliable warmth, creates a welcoming ambiance, and adds to the charm and aesthetic appeal of your Dallas County home; however, if it isn’t properly maintained, instead of being an asset, a fireplace can become a serious liability.

What is mortar? Why is it important? Does mortar sustain damage? What are the signs of mortar damage? Why are professional brick mortar repair services important? For the answers to these questions and to find out when you should contact a Richardson, TX brick repair specialist, keep on reading.

Mortar is a vital component of a brick chimney, as it binds the bricks together; without mortar, a chimney wouldn’t be able to stand. Since the material is so rigid and because it fills the gaps between the brick blocks, mortar adds a degree of fireproofing and waterproofing to the chimney. If the spaces between the bricks were left open, the excessive heat and byproducts of combustion would pour through the chimney, and moisture from the elements would pour into the structure. In other words, mortar is an essential part of a brick chimney, as it maintains its structural integrity and secures the safety of your Dallas County home.

While mortar is very durable, it isn’t infallible. While the rigidity is important, as it allows a chimney to maintain its form, there is a downside to its inflexibility, as it doesn’t absorb the movement of your Dallas County house. And while it may not absorb movement, it isn’t impermeable, meaning that it does absorb moisture. Plus, it’s exposed to the high temperatures and the caustic exhaust that fire produces. All of these factors combined mean that chimney mortar is vulnerable to deterioration. Ground settling can crack the material. It can absorb moisture from humidity and rainwater, which can crack and crumble mortar. High winds, along with fire’s intense heat and corrosive exhaust, can weaken and erode the material.

In other words, over time, mortar joints do sustain damage. At first, the damage may be minimal, but as time goes on, it can worsen. If the damage is severe enough, you can be looking at serious problems. Leaks can develop in the chimney, the byproducts of combustion can escape through the cracks and make contact with the building materials that your Dallas County home is constructed of, increasing the risk of a fire. The bricks can loosen, shift, and completely fall out, and eventually, the entire structure could collapse.

Because it plays such a crucial role in the structural integrity of your brick fireplace, and since it adds a degree of fire- and waterproofing, mortar needs to be in tip-top condition. As such, it’s important to pay attention to the condition of the mortar that holds your Dallas County chimney together. Here’s a look at some of the signs of mortar damage that you should be on the lookout for:

If you notice any of the above-mentioned issues with your Dallas County chimney or fireplace – or you’re experiencing any other problem that you suspect is related to the mortar – you’re definitely going to want to call in a Richardson, TX brick repair contractor that specializes in mortar restoration. 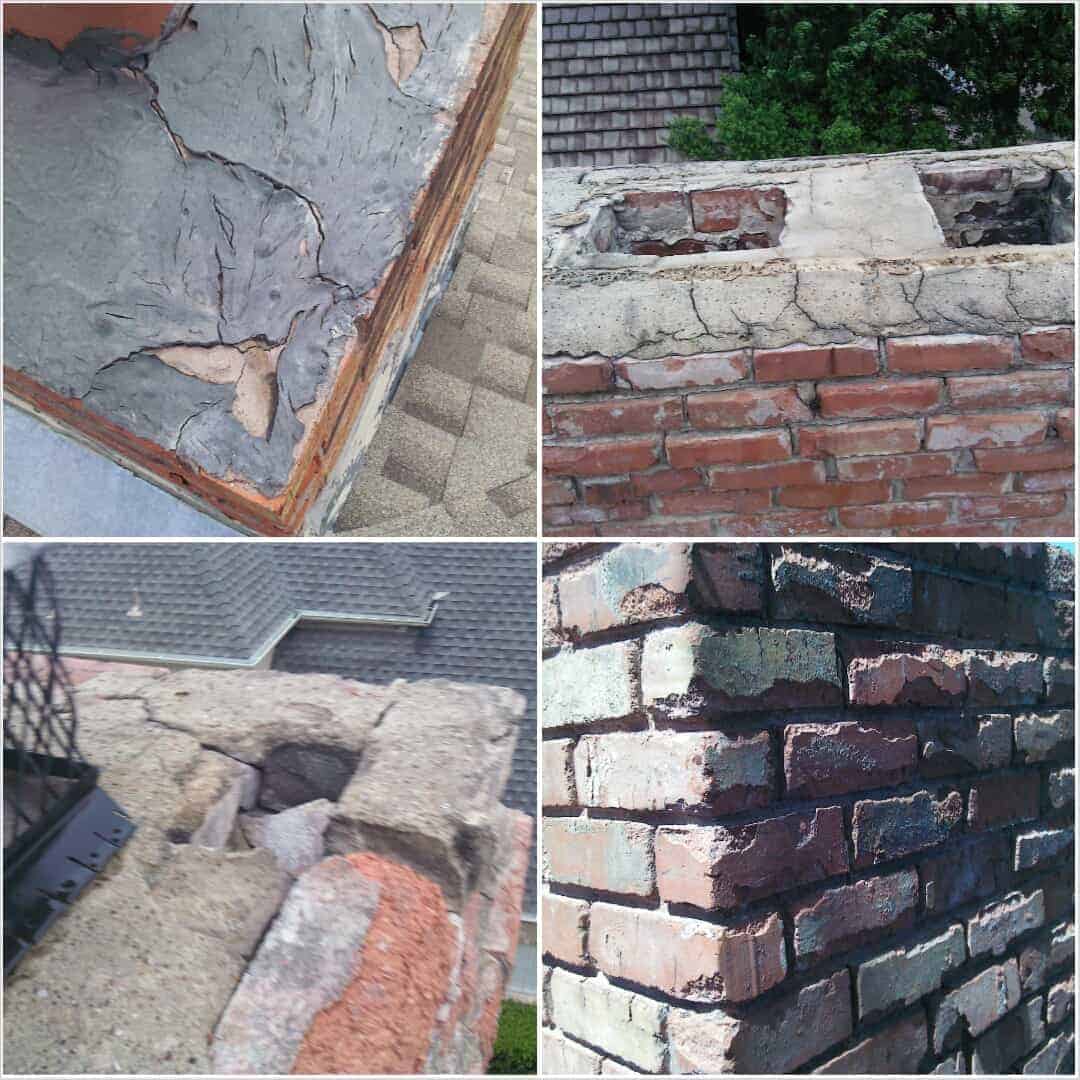 Brick mortar repair – referred to as either tuckpointing or repointing – is a restorative process that involves removing the old, damaged mortar in a chimney and replacing it with new mortar. It not only strengthens and restores the structural integrity of the chimney, but it also helps to prevent further or future water damage. It enhances the aesthetic appeal of this beloved feature of your Dallas County home, too. Brick mortar repair services can also minimize the risk of chimney fires. In other words, brick mortar repair services help to prevent more extensive and costly damage and improve the safety of your Dallas County home.

To ensure the highest quality results, you’re going to want to hire a professional Richardson, TX brick repair specialist. Repointing is a complex job that requires a great deal of knowledge and hands-on experience. A licensed, trained, and experienced professional will perform a thorough assessment of your chimney, will develop the most effective strategy, and will use the most advanced equipment and state-of-the-art materials to deliver the safest, most effective, and longest-lasting results. When done by a credible expert, professional brick mortar repair can last about 30 years.

A fireplace is one of the biggest assets of your Dallas County home. Make sure it stays that way with brick mortar repair services from Masters Services. As a premier Richardson, TX brick repair specialist, we’re experts in chimney repointing. Our team of fully licensed and insured experts bring more than 18 years of experience and a proven track record of success to the table, and are committed to delivering nothing less than exceptional results. For more information or to schedule a free consultation, browse through our website and submit a contact form, or give us a call directly at 972-877-4650. At Masters Services, we’re looking forward to restoring the safety, function, and beauty of your chimney.

Some information about Richardson, TX

Richardson is a city in Dallas and Collin counties in the U.S. state of Texas. As of the 2019 American Community Survey, the city had a total population of 121,323. Richardson is an inner suburb of Dallas. It is home to the University of Texas at Dallas and the Telecom Corridor, with a high concentration of telecommunications companies. More than 5,000 businesses have operations within Richardson’s 28 square miles (73 km2), including many of the world’s largest telecommunications and networking companies, such as AT&T, Verizon, Cisco Systems, Samsung, ZTE, MetroPCS, Texas Instruments, Qorvo, and Fujitsu. Richardson’s largest employment base is provided by the insurance industry, with Blue Cross and Blue Shield of Texas’s headquarters, a regional hub for GEICO, regional offices for United Healthcare, and one of State Farm Insurance’s three national regional hubs located in the community.

Settlers from Kentucky and Tennessee came to the Richardson area in the 1840s. Through the 1850s, the settlement was located around the present-day site of Richland College. After the Civil War a railroad was built northwest of the original settlement, shifting the village’s center closer to the railroad. Richardson was chartered in 1873, and the town was named after the secretary of the Houston & Texas Central Railroad, Alfred S. Richardson.

In 1908, the Texas Electric Railway, an electric railway known as the Interurban, connected Richardson to Denison, Waco, Corsicana and Dallas. In 1910 the population was approximately 600. A red brick schoolhouse was built in 1914 and is now the administrative office for the Richardson Independent School District. In 1924 the Red Brick Road, the present-day Greenville Avenue, was completed. The completion of the road brought increased traffic, population and property values. The town incorporated and elected a mayor in 1925. In 1940 the population was approximately 740.
After World War II the city experienced major increases in population, which stood at approximately 1,300 by 1950. Throughout the 1950s the city continued to see growth including the opening of the Collins Radio Richardson office, Central Expressway, a police department, shopping centers, and many homes. Texas Instruments opened its offices in Dallas on the southern border of Richardson in 1956. This was followed by significant gains in land values, population, and economic status. In the 1960s Richardson experienced additional growth including several new parks, facilities, and the creation of the University of Texas at Dallas within the city limits. By 1972 the population was approximately 56,000. Residential growth continued through the 1970s and slowed in the 1980s. Commercial development increased throughout the 1980s. Richardson had a population of 74,840 according to the 1990 census. Population increases throughout the 1990s were primarily from development of the northeast part of the city. The city of Buckingham, after being completely surrounded by Richardson, was annexed into the city in 1996.

Richardson had a population of 91,802 as of the 2000 census. By 2002 Richardson had four Dallas Area Rapid Transit (DART) light rail stations and had built the and the adjacent Galatyn Park urban center, which has a 2-acre public pedestrian plaza, a luxury hotel, and mixed-use development. Richardson was a ‘dry city’ with no alcohol sales until November 2006, when the local option election passed to allow the sale of beer and wine in grocery and convenience stores. In the fall of 2008 Peter Perfect, a television show, came to Richardson. The business-makeover show remodeled SpiritWear, an apparel and embroidery store in the city’s historic downtown area. The episode first aired on January 22, 2009. It was the first episode of the series to be filmed outside of California.